What’s Health Care Like in France and the Netherlands? 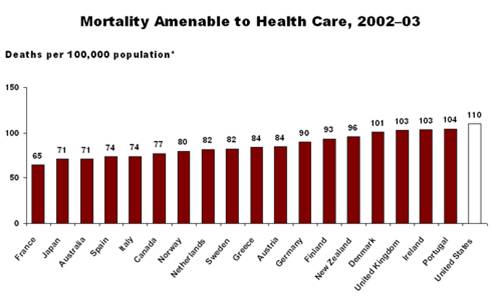 In a 2003 ranking of 20 advanced countries, the United States finished 16th in “mortality amenable to health care,” a statistic that determines deaths from certain causes before age 75 that are potentially preventable with effective and efficient health care. Just 26 percent of Americans could get same-day appointments in a 2008 survey and 31 percent of Americans reported waiting more than two hours for care in an emergency room, according to a 2007 survey.

Jonathan Cohn wrote a piece recently that compared the health care system in the US to those of France and the Netherlands:

People in these countries were getting precisely what most Americans say they want: Timely, quality care. Physicians felt free to practice medicine the way they wanted; companies got to concentrate on their lines of business, rather than develop expertise in managing health benefits. But, in contrast with the US, everybody had insurance. The papers weren’t filled with stories of people going bankrupt or skipping medical care because they couldn’t afford to pay their bills. And they did all this while paying substantially less, overall, than we do.

Now, if you compare the US with France and the Netherlands based on the stats I mentioned earlier, 60 percent of Dutch patients and 42 percent of French could get same-day appointments. That number in the US was just 26 percent. I know from personal experience how hard it is to get a same-day appointment—come to think of it, I don’t know if I ever have gotten one. Only 9 percent of Dutch patients waited more than two hours for care in an ER in a 2007 survey, compared with 31 percent of Americans.

What this boils down to is that both France and the Netherlands have universal health coverage at a significantly lower cost than what we are spending.

The French spend around 11 percent of their gross domestic product on healthcare, the Dutch around 10. In the US, we spend around 16 percent. And, unlike in the US, the burden for paying this is distributed across society – to both individuals and businesses – in an even, predictable way.

Although the French and Dutch health care systems aren’t perfect, they do highlight examples where universal coverage does not mean longer waits and costlier care. Why are we, then, paying more without the benefit of universal coverage? Senators Edward Kennedy and Christopher Dodd are trying to ensure that this changes under their revised plan to the Senate health committee. According to the New York Times, their revised health care reform outline scales back subsidies to help low-income Americans buy insurance and expects to cover 97 percent of Americans.