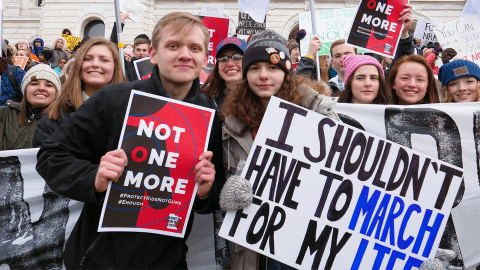 Minnesotans across the state came together this weekend to stand up for gun reform as part of the worldwide “March for Our Lives” demonstration. It wasn’t just the Twin Cities. From Duluth to Fargo-Moorhead, Minnesotans from all parts of our state agree that not one more student should die from gun violence. All of these marches were student-led, proving that you’re never too young to start a revolution.

Downtown Duluth was flooded by hundreds of students and community members, demanding that their elected officials take action to prevent gun violence. The march was collectively organized by Duluth’s high schools and local universities, featuring speakers from the schools who were met with cheers from the growing crowd. The march in Willmar drew over 200 people, organized by Senior High School students with support from partnering organizations. The crowd of teachers, students, and families wore orange to represent the movement and chanted “Enough is Enough” across South First Street. Community members marched through downtown Fargo, collecting a crowd of over 300. Adults and organizations such as Moms Demand Action FM, were there to show support but made it clear that this march was student led and organized. They chanted together, uplifting the voices of the young organizers who refuse to be silenced as they repeated, “Never again!” The march in Rochester was organized entirely by students, led by Century High School student, Anjali Goradia. They led people to Mayo Park and used the community event as an opportunity to register voters. Several hundred people gathered for the march organized by Brainerd High School students, choosing to focus on the effort for universal background checks on gun sales. They told reporters that the adults in their lives had failed to make the difference, so they stepped up to make sure legislators would listen and so that they can feel safe going to school. Winona students are so MN nice, they marched twice. They sent about 100 students to St. Paul for the march at the Capitol, then organized their own march for the following day. They wanted to make the event accessible to their neighbors in Winona who didn’t have the opportunity to travel to the State Capitol. No matter the size of your town, your voice should be heard by your representatives. More than 300 people walked together carrying signs calling for gun safety in Sartell. They handed out flyers with steps people could take to create change, ending their march at First United Methodist Church, which opened its doors so that marchers could light candles in honor of gun violence victims. Their organizers made it clear that this demonstration was only the beginning. Minnesotans would use this momentum to take action and create change. These demonstrations have shown the country that Minnesotans stand together and will not be ignored. We’ve united to send a message to our representatives: We’ve had enough. We demand gun reform now.