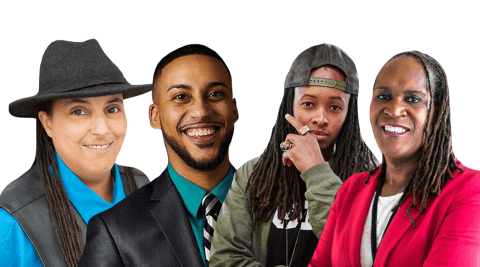 Happy Pride Month! In celebration, we’re highlighting LGBTQ trailblazers and change makers who are making a difference in their communities through art, poetry, and activism. Learn more about these incredible Minnesotans and the work they’re doing to create spaces and opportunities for queer voices. As one of the first openly transgender City Councilmembers, he entered the race to represent Ward 4 in Minneapolis partly because he realized the status quo wasn’t serving the best interests of everyone in his city. Now, he’s one of the first openly transgender elected officials in the United States, paving the way for future candidates while building a more progressive Minneapolis through a racial justice centered lens. Anderson is the co-owner of Cafe Southside and community activist who has won countless honors for work on social justice in the LGBTQ community for over 15 years, specifically focusing on serving transgender people of color through awareness for a resolution that would make restroom access for transgender folks easier and safer, and supporting programs that allow trans student athletes to play on teams that match their gender identity. Roxanne is also a Bush fellow and co-founder and director of RARE Productions, which promotes and produces queer artists of color. They’re determined to become a leader who creates a society that enables queer folks to thrive while mentoring the next generation of changemakers to build on that progress. An organizer who worked on Rep. Ilhan Omar’s campaign before running for Ward 1 seat on the Minneapolis City Council, she ran on a platform of worker’s rights and racial equity because she became tired of elected officials dismissing the needs of communities of color. She may not have won the race, but she forced conversations around worker’s rights, racial justice, and the status quo. Is the first African-American openly transgender woman to be elected to office in the United States, serving as a member of the Minneapolis City Council. She is a writer, performance artist, and poet who united volunteers with her enthusiasm and vision for Ward 8, winning with more than 70% of the vote. Now, she’s working to make Minneapolis a city that works better for everyone. Scott is both a visual artist and the Executive Artistic Director of Patrick’s Cabaret, a Minneapolis grassroots queer arts organization that centers provocative and inclusive work, unfortunately closing this year. He’s best known for creating and facilitating spaces for queer artists, making it a mission to collaborate with “people who are working on the edge of culture, whether that’s radical forms or content.” Collins was only 20 years old when they won the Most Promising Young Poet Award from the Academy of American Poets. They are not only an impressive poet and author, but also give back to their community by mentoring and supporting young poets through TruArtSpeaks. Attend one of Collins’s performances or read their book, Autopsy, for a cathartic journey through grief and mourning. Representative Allen is a historic trailblazer, as the first Native American woman elected to the Minnesota Legislature, the second lesbian elected to the statehouse, and first openly lesbian Native American woman elected in the United States. She is the a founding member of the People of Color and Indigenous Caucus, making progress on issues that affected the American Indian community. She says that she felt called to public service when, “the legislature was 98 percent white. I wanted to be a voice for the people that were left out.” Is the executive director of TruArtSpeaks, an organization whose mission is to “cultivate literacy, leadership and social justice through the study and application of Spoken Word and Hip Hop culture”. She is also one of Minnesota’s standout poets, using her writing to explore issues such as racism and social justice. Bystrom is the founder of RECLAIM, a nonproft that provides accessible mental health support for queer and trans youth between the ages of 13 – 25.  One of the most amazing things about RECLAIM is that it remains open because of thousands of Minnesotans who collectively raised $35,000 through small grassroots donations of $25 or $50. Bystrom says, “What makes RECLAIM really unique and special is how loved and supported it is by the community. That’s the whole reason RECLAIM exists to begin with.”

*This list has been edited to reflect the change in ownership of Jackalope Tattoo shop. We’ll be featuring a future addition of the new owner, Emi Nijiya.