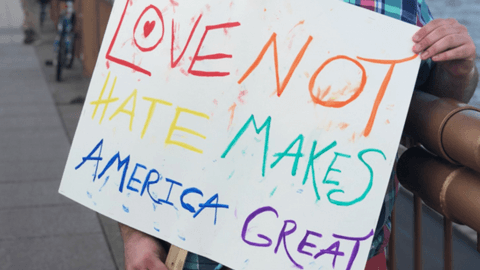 Trump held a rally in Duluth on Wednesday and Minnesotans were out in force to stand up against his divisive agenda. Here are some of our favorite highlights:

Indignant Minnesotan schooling Trump on the meaning of Minnesota Nice (even if you’re from Wisconsin).

Actually, we like welcoming new neighbors to Minnesota. We even sometimes welcome people who move in from – GULP – Wisconsin. You shouldn’t feel the need to speak for us again.

Sky Johnson giving us hope for the future.

Sky Johnson, 10, of Duluth said “I thought I would come protest to try to make it better.” pic.twitter.com/vxIhWp996x

Thousands of protesters uniting to keep families together.

Donald Trump in Duluth? No thanks.

Protesters chanting "Hey, hey, ho, ho, Donald Trump has got to go" along the bike path under Interstate 35. #TrumpDuluth pic.twitter.com/IB3tcmMDcu

Local businesses standing up for children and families.

President Trump arrives here in Duluth tonight, where talk of the immigration crisis is in the air. pic.twitter.com/26koXamlm8