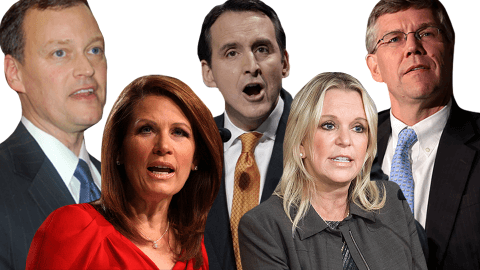 For National Pride Month, we’re naming and shaming elected officials who have stood in the way of LGBTQ rights and Minnesota values of equality and dignity. Who introduced an “exemption for religious beliefs” bill, making it legal for employers, landlords, and businesses to turn away gay customers or fire gay employees and introducing an anti-transgender bill that would make it illegal for schools to allow transgender and gender nonconforming students from using the bathroom of their gender. For voting against the same-sex marriage bill and being a vocal opponent of LGBTQ rights. Who wrote a book that argued the U.S. Supreme Court violated his constitutional rights by permitting gay marriage, using “logic” that compared his plight to slavery. For opposing same-sex marriage and supporting a constitutional marriage amendment that defines it only as “the union between one man and one woman.” Who has said the DFL-controlled Senate up to 2016 was a major roadblock in his efforts to repeal gay marriage. In response to a question about same-sex couples’ right to marry, she said, “They can get married, but they abide by the same law as everyone else. They can marry a man if they’re a woman. Or they can marry a woman if they’re a man.” She has also referred to being gay as being “part of Satan” and even compared it to slavery. He has doubled down on his anti-LGBTQ agenda since his failed Presidential run. He co-sponsored a Minnesota constitutional amendment to ban same-sex marriage, vetoed an anti-bullying bill that protected LGBTQ students, and was the keynote speaker at an annual fundraiser for Minnesota’s worst anti-LGBTQ hate group.