Jeff Johnson is Too Extreme for Minnesota. 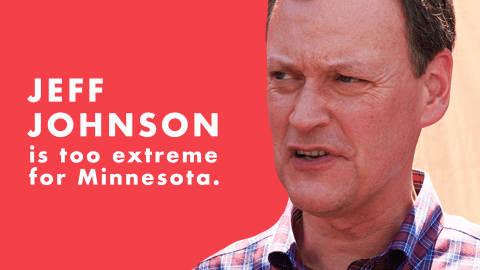 Minnesotans soundly said no to another four years of Tim Pawlenty after we reminded them about his harmful record as governor. But Jeff Johnson’s record isn’t any better and we can’t trust him to do what’s best for our families or our state. Minnesotans rejected Johnson’s harmful agenda before and we will again.

If elected governor, Johnson would take away health care from thousands of Minnesotans, including people with pre-existing conditions. He would bring Donald Trump’s disastrous tax plan to Minnesota, which slashes health care programs for children, seniors, and people with disabilities to give huge tax breaks to the wealthiest and corporations. He would make it harder for a woman in Minnesota to access abortion care by signing some of the most restrictive abortion legislation in the country. Jeff Johnson would be a disaster for Minnesota.

Prepared by Alliance for a Better Minnesota Action Fund, 1600 University Ave W #309, St Paul MN 55104. Not prepared on behalf of or in consultation with any candidate.