Jeff Johnson would bring Mike Pence’s policies to Minnesota. Here’s why we can’t let that happen. 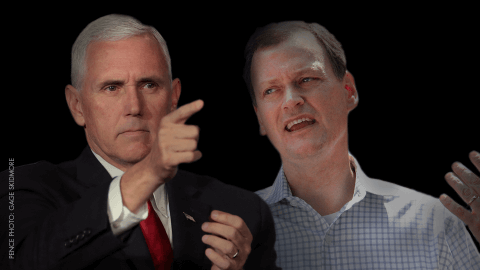 From Michele Bachmann to Donald Trump to the My Pillow guy, Jeff Johnson has never been one to shy away from endorsements from far-right extremists. Because of this, it’s no surprise that he’s touting his support from Vice President Mike Pence, a lawmaker with a long history of divisive, shady politics.

Let’s take a look at where Jeff Johnson and Mike Pence align, and what that means for Minnesota.

As Governor of Indiana, Pence slashed funding for public health, reducing per-capita spending to just $12 per resident, among the lowest public health investment in the country. Jeff Johnson has similar ideas for Minnesota.

“Shrinking Government,” like Pence did in Indiana, may sound great to conservatives like Jeff Johnson, but it had devastating effects. Under Pence, HIV cases skyrocketed in Indiana as a result of growing opioid use. Pence’s administration was slow to respond, and many say the efforts were too little too late.

Hoosiers suffered because of Pence’s drastic cuts to public health and cozy relationship with big insurance companies. Minnesotans would suffer in Jeff Johnson’s Minnesota too.

Both Jeff Johnson and Mike Pence have indicated their opposition to raising minimum wages. As governor, Pence signed a law prohibiting local governments from increasing minimum wages or requiring other benefits, like paid sick leave. In Congress, he even voted to keep the federal minimum wage at just $5.15 per hour.

By keeping wages low and prioritizing big businesses over hardworking people, Pence’s Indiana saw stagnant economic growth and low median income.  In 2015, the average Hoosier household made $32,910 annually. By contrast, Minnesota’s current median household income under DFL Governor Mark Dayton is twice as much as that, even with a relatively similar cost of living to Indiana.

Despite what Jeff Johnson and Mike Pence might think, low minimum wages help big corporations, not working Minnesotans and their families.

Mike Pence signed one of the most restrictive anti-choice bills in U.S. history. He has also attempted to defund Planned Parenthood several times during his political career.

A vocal opponent of a woman’s right to choose, Jeff Johnson has indicated his support for denying women access to safe, legal abortion.

Jeff Johnson’s plan for education in Minnesota would focus on school vouchers, which are irresponsible and reduce children’s’ access to a high-quality education. Mike Pence tried in Indiana. It didn’t quite work.

Today, Mike Pence is headlining a fundraiser in Bloomington for Minnesota Republicans, including Jeff Johnson. Fight back by donating today, and together we’ll work to keep Minnesota, Minnesota.