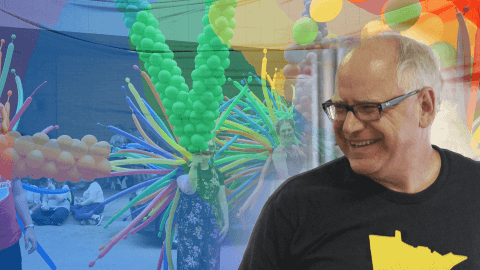 Coming out can be a scary process at any age. But for students, it can feel a little less daunting with the help of supportive school staff and LGBTQ-inclusive student groups. It did for me when I came out as a senior at St. Louis Park High School in 2009. More than a decade earlier at Mankato West High School, Tim Walz, then a social studies teacher, helped to form the school’s first Gay-Straight Alliance, and continues to fight for LGBTQ Minnesotans of all ages today.

A member of the Congressional LGBT Equality Caucus, Walz voted for the The Matthew Shepard and James Byrd, Jr., Hate Crimes Prevention Act, supported equal rights for LGBTQ people from day one of his first run for Congress, and continues to advocate for laws that would protect LGBTQ people from discrimination.

As a veteran who believes that servicemembers should be recognized for their service, no matter who they are or who they love, he fought to end Don’t Ask, Don’t Tell and introduced legislation to ensure that LGBTQ veterans and their families would receive the same benefits as their straight peers.

National Coming Out Day is a time for LGBTQ people and their allies to celebrate pride and visibility, but it’s also a reminder of how much is on the line this election season.

If elected, extreme far-right Republicans like Jeff Johnson won’t protect the rights of LGBTQ Minnesotans. Luckily, we can make sure that doesn’t happen. We can elect leaders who will continue to build a welcoming, inclusive Minnesota, like Tim Walz. Make sure your friends and family are registered to vote and have a plan to fill out their ballots.