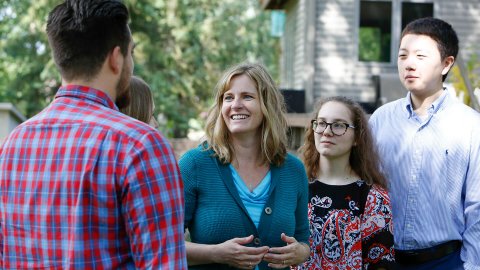 Kelly Moller has plenty of experience when it comes to fighting for Minnesotans. For over a decade, she has served as an attorney, prosecutor, and victim rights advocate, working to create a safer state and ensure justice for survivors of violence.

She’s also a passionate activist who is ready to head to the Capitol and use her voice to continue fighting for all Minnesotans.

We asked Rep-Elect Moller five questions to help you get to know her. Here’s what she had to say:

Why did you run for office?

I never thought I would run for office, but after the 2016 election I became an activist. As I saw what was happening (and not happening — like gun violence prevention) in Minnesota and became more vocal about it, people in my life started to suggest that I consider running for office. I realized that I had the right skill set and passion to make a difference!

What do you love most about your district?

How to choose just one thing? Like many people who live here, my family is thankful to live here for the wonderful Mounds View School District. We love the lakes and ponds, and the people are pretty great too!

What was the first thing you did when you found out you won your election?

Cried, celebrated with my team, and then took my family to Disney World!

What’s the most Minnesotan thing about you?

I’m not a Minnesota native but have lived here longer than I’ve lived anywhere else. I absorbed a Minnesota accent about as quickly as a piece of lutefisk soaks up its lye.

What advice would you give your 15-year-old self?

Take risks in life — don’t be afraid to try something new because you never know where it might lead you. Always stand up for what you believe in.

Have a question for Minnesota’s incoming class of representatives? Submit it here, and you may see it featured in an upcoming interview!