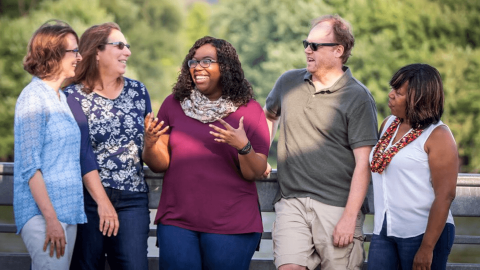 Ruth Richardson is no stranger to the Minnesota House chamber. At just 15 years old, she landed her first job leading tour groups through the State Capitol building. Now, she’s returning as a newly-elected legislator, representing District 52B.

The daughter of a union member, Rep-Elect Richardson knows the value of hard work and coming together to achieve our common goals. She put herself through law school while raising two young children and is a longtime advocate for youth and Minnesotans with disabilities.

We asked Rep-Elect Richardson 5 questions to help her constituents get to know her. Here’s what she had to say:

Why did you run for office?

I was encouraged to run for office for because of work that I have been doing in our community for well over a decade to help build a stronger Minnesota. I have worked to support homeless veterans, people with disabilities, educators, small-, minority-, and women-owned businesses, and people with substance use disorders.

What do you love most about your district?

The people. It was such an amazing experience running for office and I met so many great people on the campaign trail and have developed so many new connections and friendships.

What was the first thing you did when you found out you won your election?

Our results came in pretty late. First, I cried some happy tears and thanked all of my supporters that made my win possible. Then with just a couple of hours of sleep I was off to host a 3-day conference for over 350 people from 28 states and three countries.

What’s the most Minnesotan thing about you?

My family from the South would probably say my Minnesota accent.

What advice would you give your 15-year-old self?

It is so funny how life can come full circle. My very first job as a teenager was working in the State Capitol giving tours to youth groups and now I am looking forward to working in our capitol again as a Minnesota State Representative. My advice to my 15-year-old self would be to work hard, be fearless, be compassionate and inclusive. Don’t be discouraged when you fail. Keep going for your dreams and give back by creating opportunities for others to reach their dreams.

Have a question for Minnesota’s incoming class of representatives? Submit it here, and you may see it featured in an upcoming interview!