When Trump won’t lead, Minnesota will: here’s what MN leaders are doing about the shutdown. 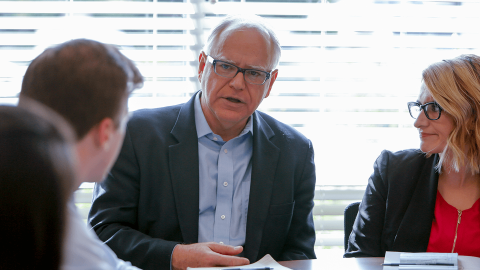 That’s how long thousands of Minnesotans have gotten up, taken their kids to school, and gone to work keeping our state safe and moving, just like normal, but without the pay they deserve. Because of Trump’s divisive temper tantrums and Senate Republicans’ inaction, the federal shutdown drags on with no end in sight.

But if Trump and Republicans won’t lead, Minnesota will.

Governor Walz, Lt. Governor Flanagan, and our elected DFL leaders are taking action to ease some of the burden and uncertainty. Here’s what they’re doing:

Governor Walz, Lt. Governor Flanagan, and Minnesota Management and Budget are working together to cover the federal funds lost to the shutdown in order to support Medicaid, veterans health care, and nutrition programs like school lunches and SNAP. Many Minnesotans rely on the Supplemental Nutrition Assistance Program (SNAP) to keep nutritious food on the table, and Governor Walz and Lt. Governor Flanagan are working with Department of Human Services (DHS) to make sure Minnesotans have the information they need so that no family goes hungry.

DFL leaders in the legislature sent a letter to President Trump last week highlighting the impacts of the shutdown on Minnesotans, and demanding that Trump reopen the government and reimburse our state.

Today, members of the DFL House Majority sent this letter to President Trump respectfully requesting he re-open the government and end the shutdown. In the spirit of bipartisanship, we invited House Republicans to sign on but none did. https://t.co/VHACCmHNIl #mnleg

This week, U.S. Rep Ilhan Omar joined federal workers to call on Trump to reopen the government. She is also planning to introduce a bill to ensure that furloughed workers are reimbursed for their child care expenses.

Senator Tina Smith has proposed a plan to reimburse federal contractors, who otherwise wouldn’t receive back pay for their lost wages during the shutdown.

Low- & mid-income federal contract workers, like janitors, cafeteria workers & security guards, aren’t getting paid during the shutdown & haven’t received back pay after past ones. Watch this @nowthisnews video to hear how I’m working to right that wrong: https://t.co/9bwN71sE7z pic.twitter.com/cxclQqgxke

Our Democratic leaders in Minnesota are working around the clock to find solutions and keep working families afloat. How long will it take before Trump and Senate Republicans to do their job?