Black Minnesotans who are making history in 2019.

February is Black History Month. And while this month is a great time to look back on and honor the achievements of Black Americans in the past, it’s also important to recognize those who are continuing to fight for justice and equity in our present and future. Black history is happening all around us, right here, right now.

In 2018, Minnesotans sent new and diverse leaders to elected offices from border-to-border in Minnesota, and to Washington DC. Here are just a few of the Black Minnesotans who are making history today.

City and county leadership in Minnesota looks a lot more diverse this year after Black Minnesotans celebrated historic wins in local races across the state. In Brooklyn Center, the most diverse city in Minnesota, Mike Elliott, a small business owner and education advocate, became the city’s first Black and first Liberian-American mayor. 220 miles northwest, attorney and father of three Jonathan Judd made history as the first Black mayor of Moorhead. In Hennepin County, Angela Conley earned a following with her racial justice-focused vision and became the county’s first Black commissioner.

In the 2018 elections, Minnesotans elected the most diverse House freshman class ever, including several Black voices ready to work for MN families and communities. Ruth Richardson, a mother of three from Mendota Heights, is the chief author on common-sense gun safety legislation making its way through the house. Hodan Hassan and Mohamud Noor, two Somali-American representatives from Minneapolis, are working on several bills to make our schools stronger and more inclusive. 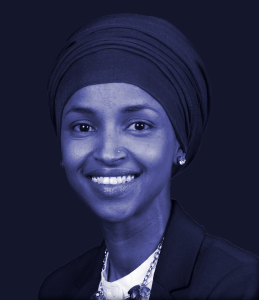 After serving two years in the Minnesota legislature as the nation’s first Somali-American elected to public office, Ilhan Omar was elected congressperson for Minnesota’s 5th district, making her the first woman of color to represent Minnesota in Congress. Omar has been an outspoken advocate for immigrants, refugees, and people of color in Minnesota, and is continuing that work in Washington.

Minnesota is growing more diverse every year, and it matters more than ever that our elected leaders reflect the diversity in our state and carry on the work of civil rights leaders of the past. We need to continue to fight for equity and opportunity for all Minnesotans, no matter what they look like or where they live.