Minnesota: give yourselves a pat on the back. After days of dead car batteries, school closings, unhappy dogs, and frozen toilets, we finally made it to the weekend. But even during the deep freeze, Minnesota legislators are still at work, and Minnesota Republicans have still managed to squeeze in plenty of WTF moments.

Here are the worst of the week:

Stay “wam” out there!

Just because it’s cold out right now doesn’t mean our climate isn’t warming at an alarming rate. That’s like saying that the sun isn’t real because it’s dark out. Just ask the NOAA. Or NASA. Or pretty much any scientist.

Despite the evidence, Trump still took to Twitter to make a joke of “Global Warming,” and Minnesota Republicans like U.S. Rep Jim Hagedorn and Rep. Steve Drazkowski ate it up. 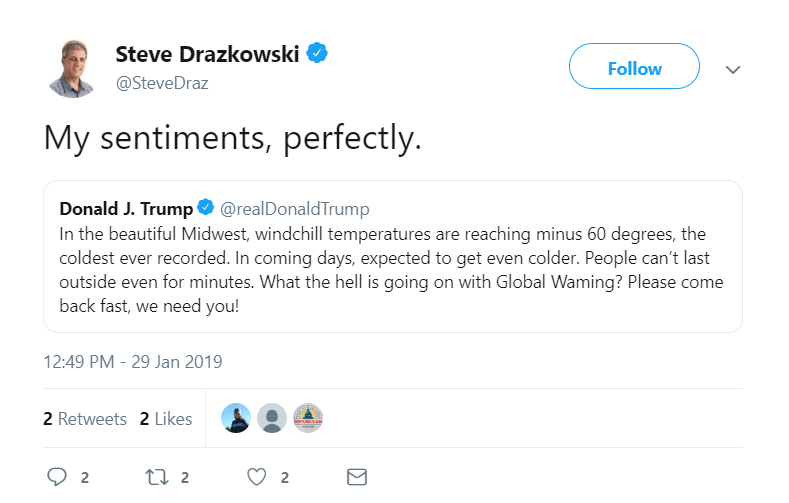 It’s a shame that some of the people charged with making decisions about Minnesota’s climate policy won’t listen to the facts.

While Minnesotans overwhelmingly support criminal background checks for all gun purchases and common-sense gun laws, Minnesota Republicans continue to introduce bills that would make us less safe. Similar to a bill introduced last week in the House, a new Senate bill to allow people to carry firearms without a permit. Minnesotans just want to feel safe at work, at school, and in their communities. Why are Republicans putting us more at risk?

Minnesotans who have a newborn baby, have recently adopted a child, or are caring for an ailing family member deserve time to spend with their loved ones without worrying how they’ll pay the bills. That’s why our Democratic elected leaders are working to ensure earned paid family and sick leave for Minnesota workers. Unfortunately, Republicans are already trying to shut it down. While a Paid Family Leave bill passed committee this week, all of the Republicans on the committee voted against it.  Republicans can’t seem to do what’s right for Minnesota families.