Weekly WTF: Are Republicans really THIS out of touch?

Happy Friday, Minnesotans! This week, Republicans proved that they’re out of touch with the issues that Minnesotans care about, and the things that most affect our daily lives. Here’s the worst of the week:

Minnesotans with diabetes and their families have been forced to live with the skyrocketing cost of insulin for too long. That’s why DFLers drafted the Alec Smith Emergency Insulin Act named after a young Minnesotan who died at 26 because he couldn’t afford his insulin. Senate Republicans are standing in the way of the bill, because they’re afraid to stand up to Big Pharma, apparently. (Maybe these big pharma contributions to the Republican State Leadership Committee have something to do with it…)

So what are Minnesotans with diabetes supposed to do? Republican Senator Michelle Benson had some, um, suggestions… 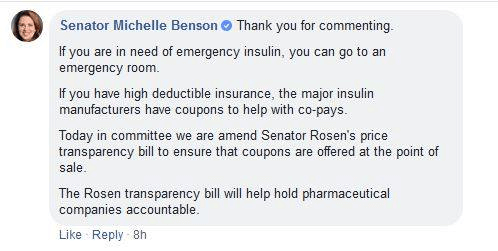 We heard from Minnesotans who pay hundreds of dollars out-of-pocket for their insulin every month with manufacturer coupons. We heard from people with diabetes who are still paying off their emergency room visits after being slapped with thousands of dollars in bills. Why isn’t Senator Benson listening?

Coupons are great for saving a few bucks at the grocery store, but asking Minnesotans with diabetes to rely on them for the drugs they need to survive is inhumane and wrong.

These targets miss the mark

This week, Republicans in the Senate released their budget targets, and, no surprise here, it leaves Minnesotans with lots of questions about the programs and services they rely on. The Republican plan cuts funding for transportation while many of our roads and bridges lie in disrepair (raise your hand if you’re still dodging #mnpotholes!), prioritizes irresponsible school vouchers over our public schools, and creates an uncertain future for Minnesotans’ health care.

Plus, it’s based on wonky math that doesn’t account for inflation.

While Governor Walz, Lt. Governor Flanagan, and DFLers in the House have created budget proposals that make historic investments in our communities, Republicans want to continue to shortchange Minnesotans with budget gimmicks and vague promises. Together, we need to let Republicans know what we really want to see in our state budget. Find out who represents you here.