The Truth About The Center of the American Experiment.

By now, I am sure you’ve read the article in the New York Times about a group of bigots in Saint Cloud. From getting unnecessarily worked up over school lunch options, and residents of the community having the gall to “walk around,” these individuals did not acquit themselves well when given the opportunity to show their true selves. The “saying the quiet part loud” section which also turned into the title of the piece, came from Kim Crockett;

Kim Crockett, the vice president and general counsel of a conservative Minnesota think tank called the Center of the American Experiment, said she intended to eventually sue the state and challenge the resettlement program in court.

“I think of America, the great assimilator, as a rubber band, but with this — we’re at the breaking point,” Ms. Crockett said. “These aren’t people coming from Norway, let’s put it that way. These people are very visible.”

The Center of the American Experiment is a Conservative think-tank that is part of the State Policy Network, who works hand in glove with the American Legislative Exchange Council (ALEC), and bankrolled by entities like the Bradley Foundation. So, needless to say, when their corporate and Koch-influenced backers say jump, the CAE does.

In light of this story, CAE has issued a mushy apology claiming that statement was opposed to “the views and values of our organization.” Except… it actually quite accurately reflects the views of the organization. Kim Crockett isn’t the only staff member of the CAE that has publicly and consistently expressed views that are prejudicial and hateful. Katherine Kersten, a founding director, former chair of the organization, and current Senior Policy Fellow has numerous instances of asinine bigotry under her belt. From her position that transgender advocates “pervert language, using it not to communicate truth, but to advance their program—the hallmark of propaganda” to her stating that gays and lesbians who wanted the right to marry had a “vindictive loathing of norms and limits in human society.” She even called efforts to address racial issues in Saint Paul Public Schools “No Thug Left Behind.”

The Center’s president, John Hinderaker is also one of four contributors at the arch conservative blog Poweline, where his writing over the years touched on such diverse topics as “the myth of black victimization by whites” and determining an uptick in crime in Minneapolis is due to “racial hostility promoted by the Obama administration and the Black Lives Matter organization.” Additionally, he gives voice to his readers who get a megaphone for not at all rational thoughts on interpreting literature in high schools across the metro.

Hinderaker jumps on any opportunity to discuss disparities in crime rates in bad faith, painting those who don’t share his views as race-baiters or hustlers, and his charming use of ‘legal’ in reference to segregation shows that he knows what tune he’s whistling in his writing “Slavery is now 150 years in the past, and legal segregation 50 years. Yet the social pathologies exhibited by the African-American community, especially black men, have gotten worse, not better, as these dark eras have receded into the past.”

Also, he never passes up an opportunity to tell on himself. 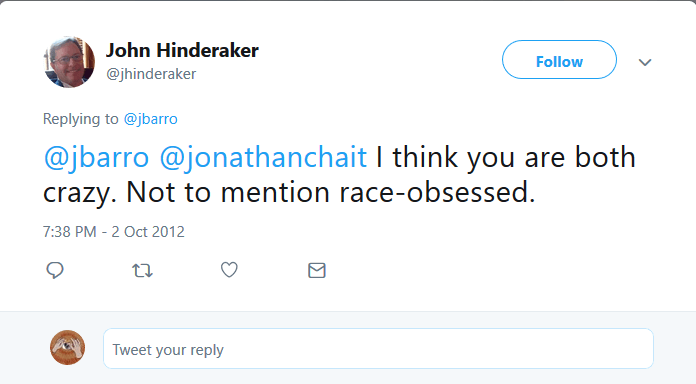 So, whenever you have the misfortune of seeing staff from the Center of the American Experiment on television, in print, or driving you in a Lyft, remember that despite all the trappings of think tank, the only policies they are interested in are what their corporate backers demand.